Many visitors to our farm have asked us about the old manure spreader. Here is its story, told by Tim 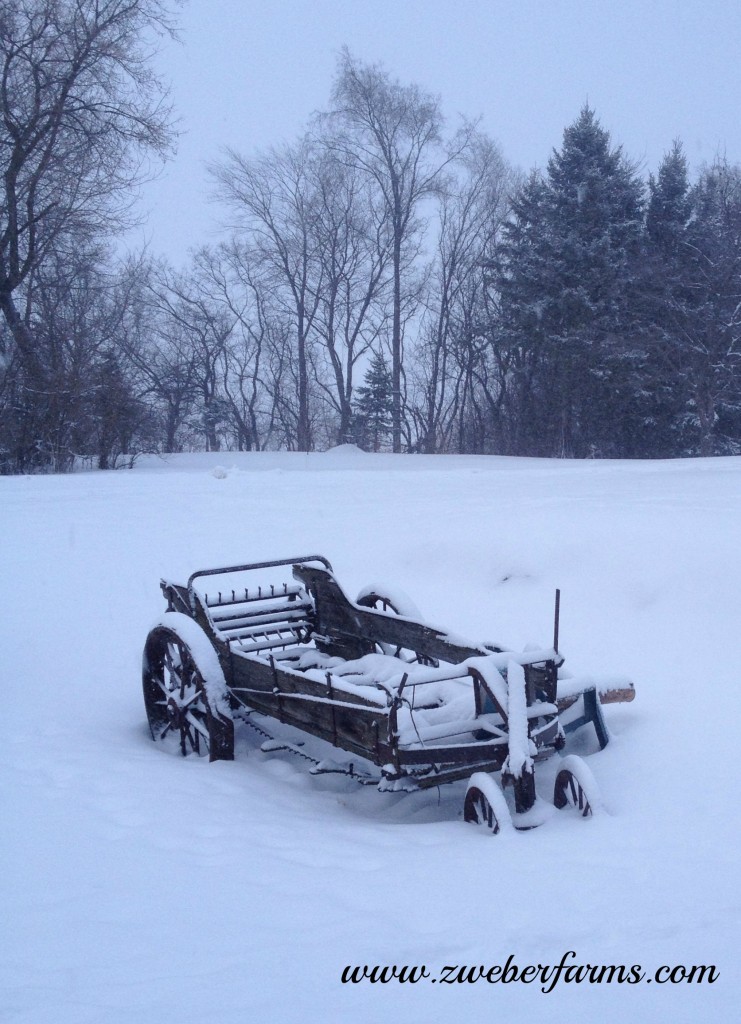 There is an old manure spreader that rests outside our farm shop. It didn’t ever get pulled by one of my grandfather’s work horses to haul a load of manure on our fields but it’s there all the same. It sits quietly observing the passing of the seasons and the daily bustle of caring for our animals. Its steel wheels and the gears that once moved the sweep apron and assembly with iron pegs to throw the manure long ago are rusted tight never to move again. Its seat and the long curved spring it once perched on with two pegs for the person seated to rest their feet on is missing. One could say it looks like old junk that should have been sent with the scrapper long ago but they’d be wrong. It looks to me like a beautiful reminder of our farming past even if it didn’t come to our farm until it was long into its retirement. Here is its story and the story (somewhat fictional as my memory isn’t that great) of the man who once drove it.

I first saw it when my father and I got out of the truck on a sunny hot summer afternoon, the type so typical of haying season. We had come to the old man’s farm to look at some hay he had for sale. He didn’t have animals anymore and I believe he rented out most of the farm to a cash cropper but still made hay perhaps for the enjoyment of watching as the tall green vegetation fell in neat rows behind his tractor or just to feel the sense of accomplishment. These are questions even a young boy knows not to ask old gentlemen out of fear it could be taken as a questioning of his sensibilities. The hay was of a good quality and we agreed to purchase it. I believe we fed it to our young heifers but that’s not a very important detail in this story.

He showed us around his farm talking about how hard pigs are on buildings and other such stories of his farming days. I noticed a large patch of raspberries by a garden and commented on it. How that lead to his next story I don’t remember but he got to talking about his wife. She was a city girl as he put it but I don’t know if he meant town, as there were no cities to speak of nearby us in his courting days, or if he had ventured to much more exotic places like the Twin Cities. He told us a story of when they were first married and she wanted to plant their first garden. She went to town and got seeds for a number of things but the watermelon ones she wasn’t quite sure what to do with. He laughed as he told the story obviously back with his wife on that day in his mind “she said the man at the store told her to plant them in hills and she asked me which hill on the farm would be best”. I have no idea whether his wife was still living or deceased when he told me that but I appreciated him sharing a memory that I could tell was very special to him with me.

As we walked back to the truck to hook up to the wagon of hay we bought I saw the spreader again and couldn’t help but notice how beautiful it was in its construction even in its partially rotted state. I asked him offhand what he was planning to do with the old spreader parked in the grass. He didn’t have any plans for it. It had been sitting for years and would probably sit there for many more. I asked dad on the way back to the farm with our load of hay if we could buy that old spreader. I wanted to fix it up as a 4-H project, replace all the old rotting wood with new white oak and fix the broken seat. Maybe I’d even the paint the steel and get the old action that spun the manure out working again. Dad agreed to buy it if for me and we asked the old man if we could purchase it from him when we returned the empty wagon after unloading the bales and stacking them in our dairy barn’s big old hayloft. He agreed to sell it to us for $60 and I don’t remember any haggling although there probably was because I don’t know if any deal is ever made on a farm without at least some bargaining needed or not. We picked it up from his farm a few weeks later with our loader tractor and some wagon or possibly a trailer borrowed from a neighbor. Using the forks on our tractor we carefully loaded and then unloaded the spreader once we got back home. It survived the trip and loading/unloading surprisingly well. We decided to just put it in front of the shop on a patch of grass in front of a retaining wall I’m still not entirely sure why we constructed. I guess it was a good use for some of the millions our rocks that litter our fields every spring which must be picked or suffer the consequences of broken machinery.

Years flew by and the spreader never got repaired to its youthful glory or anything like it, a testament to my ample dreams but lack of time or ambition to bring them all to fruition. From time to time I stop and snap pictures of it basking in the glory of whatever season it is silently observing. I still think it is a beautiful piece of equipment and feel no less admiration for it and what it did in its lifetime even if some people would call it junk.

4 thoughts on “The Old Manure Spreader”